Firing Both Barrels: Knowing When to Keep Pulling the Trigger 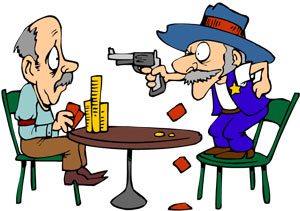 Sometimes one shot won’t do the trick. On a shotgun, there are two barrels, each holding a separate cartridge, and a hunter must use both to accomplish his task.

Take this situation, No limit holdem cash game, shorthanded (6 max), you are on the button with K8s. Everyone folds to you. What’s your play? (Cue Jeopardy music.)

Did you say raise? I hope so. This is a standard play, from the button, with K8 suited (which is a top 20% hand if you did not know). I would raise to 3.5 big blinds here, a fairly standard cash game raise. If you said call or fold, you are not playing aggressively enough, especially in a 6-max game.

IF a tight player re-raises you, you can lay it down, but a tight player might defend their blind with only a top ten per cent hand, which means that 81% of the time, a raise here takes the blinds. (The blinds should be defended much more loosely than this, especially at 6-max, but that’s a subject for another article. Many players are this tight, even at shorthanded games.)

Generally correct answer for all levels of no limit holdem: bet one-half to two-thirds of the pot. There are lots of hands that a loose caller might smooth call your preflop bet with here: Ace-any, middle or low pair, suited connectors, two broadway cards like KJ, and a lot of those hands in the caller’s range will fold to a reasonable flop bet.

You bet 2/3 of the pot and the Big Blind calls. The turn is a Q. The BB checks. What’s your play?

Fire the second barrel. You have nothing, and you’re unlikely to win the hand if it goes to showdown. If your opponent called preflop and on the flop with a hand such as 66, there are now three overcards on the board for you to have paired, and he’s still missed his set. If your opponent called on the flop with 98, he had sufficient implied odds to call your flop bet, but by betting 2/3 pot again, we deny him the odds to draw again.

If you consider all of the hands that might call preflop here, there are lots of them that we are either 1) ahead of, or 2) behind but we can push them out of the pot. Since we don’t know whether we are ahead at this point, we must take the aggressive action as a general rule.

When to Double Barrel

The double barrel move is a great weapon for intermediate No Limit Holdem players to add to their arsenal. It works best against decent or better players, and works better as you move away from micro-stakes. You are more likely to see weak calls at the lowest levels, and you won’t be missing a lot of value if you avoid this move at the lowest levels.