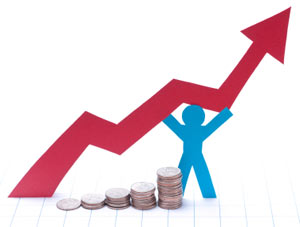 If you are focusing on Sit and Go Poker Tournaments and are taking it seriously then you are looking to get the best return on your investment (ROI) as possible. Your investment in this case is your buy in to the SNG and the return is obviously any prize money you win. In this lesson we look at how to maximize your ROI.

How to Improve Return on Investment (ROI)

Play to win. That’s the golden rule of Sit and Go tournaments. It sounds simple, but a common human tendency is to get conservative in situations where money is on the line.

You are not looking to be average! If you are committed to playing these tournaments in the long term, you must look for every way to increase your long term expectation by even small amounts. The approach to the bubble and three handed play is probably the most important way to do this.

Scenario one only has a 50% ITM (in the money) rate, but has a total win of $200. This is a typical scenario for the strategy we have talked about in this guide and the Play to Win strategy.

Scenario two is 70% ITM, but the net win is only $180. These are the kind of results that playing ultra-conservatively on the bubble results in.

There certainly is a fine line to walk between getting some return by getting into the money and getting a long term benefit with fewer cashes but more wins. It can be argued that scenario two, getting into the money eight times, means you have eight chances instead of five to win first place. That is usually incorrect, since by playing so carefully, you will likely be very short stacked with little chance to win.

Bubble Approach to Return on Investment

On the bubble, it is generally wise to be cautious only if you are one of the middle stacks. Playing conservatively here is smart, because simply surviving one place gives you an almost 100% return on your investment, and you will have at least a fighting chance at one. Getting knocked out by the big stack, or crippled by one of the other short stacks if they wake up with a hand, is devastating. You went from almost +100% ROI to almost (or exactly) -100% ROI in one big hand.

Two players need to be aggressive on the bubble – the short stack and the big stack. The big stack must play aggressively because the natural tendency of average players here is to be too conservative.

The big stack can and should take advantage of this to build a huge lead going into three handed play. Although this may backfire occasionally as another player wakes up with a big hand, it is the best approach for the long term.

There are two reasons the aggressive approach is profitable in the long term:

Playing aggressively is a long term winning strategy. Your play may not seem optimal if you run into a big pair, but J-7 can get calls from 3-3 as well, which puts you in a coin flip situation. Remember that a player will only be dealt a big pair (J-J or better) roughly once in 55 hands. You only have two opponents. You do the math!